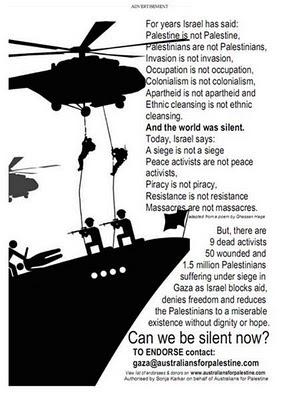 Australian for Palestine placed this advertisement in eight newspapers
In just a few days, we gathered more than 400 names and numerous organisations, with more coming.  To date, we have received an overwhelming $31,000 towards the cost of the adverts – not quite the full amount, but close enough.  It proves to us once again that people are very aware of the assault on truth and decency and our governments’ miserable failure to uphold them in the face of belligerent interests.  What is so obvious to most, that this was a deliberate craven attack on civilians in an unarmed ship under cover of darkness, is now held up as an attack on the Israeli navy and its heavily-armed commandos. And, what should have been treated as an outright crime is now to become the subject of a “mickey mouse” investigation, despite Israel’s brazen but discredited attempts to doctor film footage, disseminate racist spoofs and furiously spin its way out of an unforgiving public eye.  Not only is the culprit Israel being allowed to mount its own investigation, but now it turns out that the inquiry observer - former Northern Ireland leader Lord David Trimble - is a high-profile supporter of Israel.  Whatever happened to independence? None of this would have had the remotest chance of succeeding if the US had treated Israel’s act in the same way it treats other pariah states and criminal activities.  The difficulty is that the US has for years constructed a crystal facade around its empire and it wouldn’t do to throw stones at a friendly state-gone-rampant, lest the whole edifice comes crashing down.  But citizens around the world are beginning to see that protecting Israel right or wrong comes at a huge cost to the integrity of our own lives making everyone of us vulnerable to the excesses of power, and these same citizens are prepared to act in defence of truth and justice.  It happened here in Australia last week and it is happening all over the world: people are not blind and they are no longer buying the spin.  Our newspaper ad campaign only tapped into a fraction of the population, so one can imagine how much more would have been possible with multiple time and human resources, but what we did is part of the turning tide. Our thanks to everyone who gave generously and what they could, including their names.  While the day of the ad has now passed, more people know that they are not alone in their disgust, more people feel connected in a common drive for human and civil rights and more people are waking up to the 63-year long Palestinian struggle for freedom and justice. We are still taking names and donations and the list of names can be seen on our website for the next two weeks http://www.australiansforpalestine.com  When you are visiting, take some time to learn more about what is being done to the Palestinians on a daily basis and the terrible catastrophe that is being wreaked on them on our watch.  Few people who learn the truth are not forever touched by their narrative.  One day it will be the epic story of our times. One of our lead articles on the website today is an article by Stéphane Hessel, a holocaust survivor, diplomat, French resistance fighter, human rights activist and co-author of the Universal declaration of Human Rights who ends his piece with “I endorse the heartfelt words of Scottish writer Iain Banks, who in  reaction to Israel’s atrocious attack on the Freedom Flotilla suggested  that the best way for international artists, writers and academics to  “convince Israel of its moral degradation and ethical isolation” is  “simply by having nothing more to do with this criminal government.”  Published yesterday in America’s most popular Huffington Post, it is well worth reading.  You can read it on our website http://www.australiansforpalestine.com