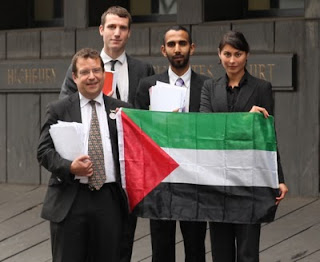 Four activists charged with aggravated trespass for blockading the Israeli-owned cosmetics shop, Ahava, in Covent Garden, London, in 2009, have been acquitted of all charges against them.

The four - Bruce Levy, Tom Ellis, Jo Crouch and Taherali Gulamhussein, all from London - had locked themselves to concrete-filled oil drums inside the shop, closing it down for a day each time in September and December 2009.

They appeared at Highbury Corner Magistrates Court, London, this week, and were acquitted this afternoon when the primary witness for the prosecution, Ahava's store manager, refused to attend court to testify, despite courts summons and threats of an arrest warrant.
Protest outside Ahava: Saturday 14 August 2010, 12-2pm, 39 Monmouth Street, Covent Garden, London, WC2H 9DD
Posted by Martin Francis at 05:00