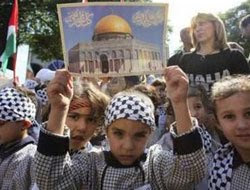 Israel has imposed strong restriction on Palestine, closing all crossings with West Bank during Eid Al-Fitr.
Similar restrictions were imposed on the West Bank during Israeli holidays in the past.
Israeli army said that all crossings would be closed over the "Jewish New Year", according to Maan News Agency. The Muslim holiday Eid Al-Fitr coincides this year with the Jewish holiday Rosh Hashanah.
Crossings will close between midnight on 7 September and midnight on 11 September, an Israeli military statement was quoted as saying.


Eid greetings to all our Muslim supporters.
Posted by Martin Francis at 09:50