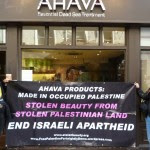 The central London branch of Israeli settlement company Ahava was occupied by Pro-Palestine activists from 11.30am until 3pm yesterday, shutting the shop for business for entire time.  Two activists managed to bring a concrete slab with tubing going through the middle into the shop and lock their arms together inside it, thus blockading the shop. The shop assistant attempted to remove them from the shop but gave up when she realised they had locked their arms inside.


The police arrived on the scene after 15 minutes and moved supporters carrying a banner outside the shop, where they proceeded to engage with a generally supportive  public about the Palestinian issue and the nature of Ahava’s business.
Instead of waiting for the trained lock on cutting team, at 2pm the police began to dismantle the lock on themselves with a hammer, risking injury to the activists whose arms were locked inside. Luckily no one was hurt and by 2.30pm they had removed the activists from the lock on and arrested them for aggravated trespass; committing trespass with the intent to stop a lawful activity. The aggravated trespass charge will of course be challenged by asserting that Ahava’s business is not lawful and so no lawful activity was halted.
When action supporters left the scene at 3pm the store was still closed, bringing the total closure time to at least 3.5 hours, over half of the trading time on the day on which Ahava generally receives the most business, Saturday.
Ahava sell beauty products from that are manufactured in the illegal Israeli West Bank settlement of Mitzpe Shalem, on the Dead Sea shore 6 miles north of the green line. Despite operating from a settlement Ahava label their goods ‘made in Israel’, and so are not only guilty of breaching international law by operating on occupied land, but are dodging British tax by taking advantage of tax breaks offered as part of Israel’s enhanced EU trading agreement, tax breaks that the European High Court confirmed in February do not apply to settlement goods after a case involving settlement company Soda Club Inc .
An international campaign has been growing against Ahava for the last three years. Actions have taken place in London, Tel Aviv, New York, Las Vegas, Paris, Washington DC, Santa Monica, Chicago, Los Angeles, Amsterdam, Austin, Montreal and the Czech Republic. The American protest group CODEPINK launched an official campaign against Ahava called ‘Stolen Beauty’ in July 2009.
Just in London three other direct actions have taken place against the company in the last two years, with the prosecution for the last two collapsing in August after the store manager failed to turn up for court, possibly afraid of having to defend the legality of her business in a court of law. A regular picket of the shop takes place every other Saturday, the next will take place again next Saturday (9th October) between 12 and 2 pm.
Message of support can be sent by posting comments on this WEBSITE