Many thanks to all our supporters who attended last night's demonstration 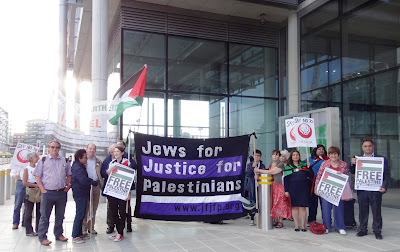 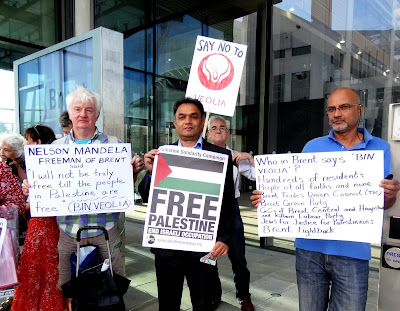 Human rights demonstrators gathered outside Brent Civic Centre last night as a petition signed byt hundred of Brent residents was presented to the Brent Executive calling for Veolia to be excluded from the Public Realm contract procurement process. The contract worth up to £250m over 16 years will be awarded by the Brent Executive at their October 14th meeting.

Exclusion is sought on the grounds that Veolia in its operations in the occupied territories of Palestine is colluding in the maintenance of illegal settlements and this infringing the human rights of Palestinians.

Veolia has been short-listed alongside Enterprise and Serco for the contract.

After hearing the speech from Liz Lindsay, Secretary of Brent and Harrow Palestine Solidarity and an activist in the Bin Veolia in Brent Campaign, the Executive referred the petition to FionaLedden, head of procurement for consideration.

THE CASE AGAINST VEOLIA'S INCLUSION IN THE
BRENT PUBLIC REALM PROCUREMENT

The public would not want the council   to give contracts to companies involved in the exploitation of child labour or the arms trade.

Veolia who are bidding for the Public Realm contract are serving the illegal Israeli settlements in the West Bank and East Jerusalem.

The UK Govt and UN do not recognise Israel’s annexation of the occupied West Bank and East Jerusalem.
Veolia helps support Israel’s illegal occupation of Palestinian land by

Veoila therefore profits by actively supporting Israel’s continued violation of international humanitarian law
Under Public Contracts Regulations, a public body may exclude a bidder or reject a bid where it is found the organisation has ‘committed grave misconduct in the course of their business’
In 2009, the UN General Assembly called on Israel to cease the dumping of waste  in occupied Palestinian land.

In 2010, UK was one of countries that voted in support of the UNHR Council resolution that stated JLR operated by Veolia is in clear violation of International Law and relevant UN resolutions.
In 2012, Richard Falk UN Special Rapporteur on Human Rights in the OPT concludes that
– Veolia’s grave breaches of the UN Global Compact make it an inappropriate partner for any public institution, especially as a provider of public services.

Also, Veolia was forced to withdraw JLR recruitment advertisements because they discriminated against Palestinians.

Locally,  WLWA, Ealing, Harrow, Richmond did not select Veolia as the preferred bidder and all had been involved in discussions with anti-Veolia campaigners.

Veolia withdrew after 2 years from the final stages of the £4.5bn NLWA procurement when they were one of only two bidders left.

As Veolia has become the target of worldwide campaigns, Veolia  has tried to waive responsibility, claiming in 2011 for example that it had sold Tovlan.

However,  on the 17th Jan 2013, the Israeli Ministry of Environmental Protection –in response to FOI by a Women's Peace Group in Tel Aviv confirmed that Veolia is the sole owner and operator of Tovlan.
We informed Brent Council of this on the 14th March but Veolia repeated its claim on 21st May 2013.
The Council does not appear to have challenged this misrepresentation.

Brent Council should seriously question any information that Veolia provides in its defence in its bid to win the contract.

One argument used against exclusion has been that Veolia in Israel and in the UK are separate entities. There is ample evidence available that Veolia is one commercial entity.

Francis Maude on the 23rd May, 2012 stated explicitly,  regarding illegal settlements that companies that have committed ‘an act of grave professional misconduct in the course of their business may be excluded from a tender exercise’

WHY IS IT IMPORTANT FOR BRENT COUNCIL?

Brent Council is particularly proud of representing a diverse population and is committed to equality and opposed to racism as demonstrated recently by their stand against the 'racist van' and the UKBA raids.
Human rights issues are at the core of the Council's values.

Our campaign has been supported by members from many religions and non-religious residents, by members of the Labour, Lib Dem and Green parties, by Brent TUC, trade unions,  GCs of Brent Central,  and Hampstead and Kilburn Labour Parties and local members of Jews for Justice for Palestinians.

We call on the Executive to take a principled stand on the issue of Veolia's collusion in the abuse of the human rights of Palestinians in the occupied territories and to take action by excluding Veolia from the £260m Public Realm contract.
Bishop Tutu said what he saw in occupied Palestine could describe apartheid South Africa.. Nelson Mandela, now a Freeman of Brent, said he would not be truly free until the Palestinian people are free. Respect them -  BIN VEOLIA!.
Posted by Martin Francis at 03:47