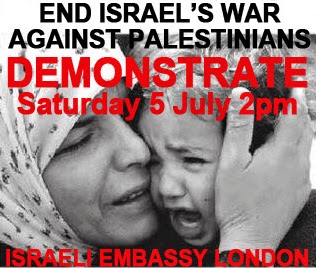 As the Israeli army mobilises close to the Gaza strip Brent and Harrow Palestine Solidarity Campaign and Brent Stop the War are urging supporters to join the demonstation outside the Israeli Embassy in London at 2pm on Saturday.

Palestinians are currently facing a horrific escalation of racism and violence as the Israeli State pursues a strategy of collective punishment following the abduction and murder of three Israeli teenagers (read PSC's statement>).

Today we learnt of the abduction and brutal death of a Palestinian teen – 17 year old Mohammed Abu Khdair in what has been described in the press as a ‘revenge’ attack by Israeli terrorists.
Mohammed’s body was found in Jerusalem after a day and evening of Israeli protests that turned into mobs streaming through the streets of the Old City and east Jerusalem chanting ‘Death to Arabs’. Palestinians were pulled from their cars and beaten.
Palestinians protesting against Mohammed’s death on Wednesday were met by rubber bullets and tear gas from Israeli police, with a Palestinian TV crew and protesters injured.
The Israeli leaders incited the mobs, including Netanyahu, by their calls for ‘vengeance’ against ‘human animals’, and Defense Minister Moshe Ya’alon talked about “settling the score”.
Calls for justice for Mohammed’s murder and restraint from our government, are woefully inadequate, given the current situation. The British government must clearly condemn Israel's incitement to hatred and violence. They must take action to end Israel’s crimes, violence, occupation, racism and apartheid – and end its war on Palestinians.
Posted by Martin Francis at 13:21