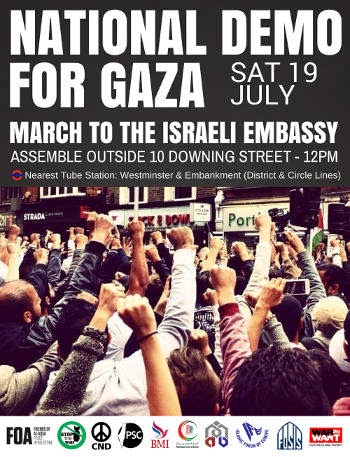 Brent and Harrow PSC will be attending this demonstration and urge supporters to join us at Downing Street. look out for our banner (below).


Meanwhile Barry Gardiner, Labour MP for Brent North, a former vice-chair of Labour Friends of Israel, made his most forthright comments on the actions of Israel in Gaza earlier this week.


Israel’s right to defend itself, of which the Foreign Secretary speaks, is not an unconstrained right, yet Israel’s response has been unconstrained. It has been disproportionate and wrong. Heavy bombing in a densely populated area with 100,000 civilians, causing the death of 170 people, a third of them children, is not self-defence, it is barbarism. What leverage does the Foreign Secretary have and will he now apply it to make the Israeli Government reappraise this barbaric and unproductive strategy?