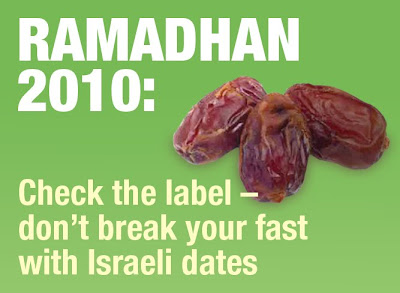 Your help is needed for Boycott Israeli Dates Campaign.
Check the Label Campaign - Boycott Israeli Dates
We have leafletted Central Mosque in Station Pde, Willesden Green,   Wembley Central Mosque, Ealing Rd as well as shops in Willesden and Kilburn.  Thanks to all the volunteers.   As  always,  we  had  a really positive response.
This Friday, 13th August  we will be leafletting outside the Mosque and Islamic Centre  of Brent at 33A Howard Rd NW2  from 12.45 to 2pm.  There are 2 exits- Howard St and Chichele Rd.  Come and join us .   We will bring the postcards and placards.  On Friday 20th August we will be leafletting the Wembley Central Mosque in Ealing Road, Wembley from 12.45-2pm
We may be leafletting the Harrow Mosque next week  and leafletting again Mosques in Ealing Rd and Station Pde during Ramadan.

The more people we have the bigger the impact and the more likely we are to convince people that the campaign is worth backing.
Date imports and consumption soar during Ramadan.   Although dates are available from many sources, dates from Israel and illegal Settlements form a large part of date consumption in the UK .
▪ Dates were Israel's leading fruit export in 2005.
▪ Dates account for about 15% of export from Israel into the EU.
▪ It is estimated that Israel produces over 10,000 tonnes of dates per year.
▪ The approximate price per kilo of dates is £8.
▪ The total income for Israel from dates in a year is approximately £80 million.
Posted by Martin Francis at 02:14