The Guardian’s obituary failed to make any mention of his repeated criticism of Israeli policies, and his commitment to the cause of Palestinian liberation. However the concern about this omission was made more serious by the deletion of a large number of comments in response to the obituary which all highlighted Tutu’s condemnation of Israeli apartheid on the grounds that such comments “violate the Guardian’s community standards”.

The comments deleted included the following:

“It’s a pity that this fine obituary makes no mention of Desmond Tutu’s stand on Israel and Palestine. He was uniquely well placed to judge whether Israel’s policies in the OPT amounted to apartheid. The fact that he said they did made an important contribution tom the struggle for justice in Palestine” and:

“An excellent obituary that amply demonstrates the breath and depth of Desmond Tutu’s moral compass. This also extended to his staunch defence of the rights of Palestinians in the occupied territories, who he believed were suffering similar apartheid policies experienced by South Africans. In 2013 he told the Washington Post; “I wish I could keep quiet about the plight of the Palestinians. I can’t! The God who was there and showed that we should become free is the God described in the Scriptures as the same yesterday, today and forever. What’s being done to the Palestinians at checkpoints, for us, it’s the kind of thing we experienced in South Africa.” Sadly many of our contemporary political leaders are currently doing what Desmond Tutu could not do; they are keeping quiet.”

After correspondence from PSC and others, including some who had had their posts removed, the Guardian has now reposted all of the deleted comments. You can read them here. We are pleased that the Guardian, after pressure, has taken action to restore the deleted comments and privately acknowledged that they should not have been deleted. It is disappointing however that they have not chosen to publicly acknowledge their actions. We are also pleased that the Guardian has now published a piece that addresses Tutu’s support for Palestinian rights – you can read it here.

What remains of concern is the fact of the original deletions. It is difficult to view these actions away from the context of the pressure being applied by Israel and its supporters to render any labelling of its laws and policies as racist, and any call for a sanctions-led response, to be forms of antisemitism. Tutu himself was subject to this critique during his lifetime, specifically after his endorsement of the Palestinian call for BDS.

PSC organised a letter to be sent to the Guardian for publication signed by over 30 prominent figures including many who were active in the struggle against South African Apartheid. The Guardian did not publish the letter but its main ask – that the comments be restored – has now been acted upon. We publish the letter with signatories below for you to read.

PSC will be writing again to the Guardian Editor and seeking a meeting to address what action the Guardian will be taking to ensure that such issues do not emerge in the future. We will also be urging them to make space in their pages to fully address all aspect of Desmond Tutu’s legacy including his criticism of Israel’s system of apartheid and fierce and unyielding advocacy for the rights of the Palestinian people.

Tutu once said “I wish I could keep quiet about the plight of the Palestinians. I can’t!” We should not allow those who wish he had stayed silent to tarnish his memory and the lesson he gave all of us about what it means to be a consistent antiracist.

To the Editor, The Guardian

Desmond Tutu’s death is mourned by all who recognise his titanic status in the struggle against racial injustice. For Palestinians his support for their struggle for justice made him an iconic figure. Regrettably, your obituary made no mention of his repeated criticism of Israeli policies, and his commitment to Palestinian liberation.

Tutu’s early support for Palestinian civil society’s call for Boycott Divestment and Sanctions was founded upon his recognition of Israel’s practice of apartheid. It is a crucial part of his legacy.

The concern about the failure to address this in the Obituary is exacerbated by the deletion of comments, including by three of the signatories to this letter, in response to the Obituary which all highlighted these issues. The grounds given were they: “violate the Guardian’s community standards”.

It is difficult to view these deletions away from the context of the pressure being applied by Israel and its supporters to render any naming of its laws and policies as racist and any call for a sanctions-led response to be antisemitism. Tutu himself was subject to this critique after his endorsement of the Palestinian call for BDS.

We call upon the Guardian to restore the posts and for its comment pages to address Tutu’s legacy of support for Palestinian rights. Tutu once said, “I wish I could keep quiet about the plight of the Palestinians. I can’t!”. This memory is the lesson he gave us about what it means to be a consistent antiracist.

Posted by Martin Francis at 10:10 No comments:

Few know that some of the  companies that the Fund invests in play an active part in the oppression of Palestinians by the Israeli Government.

The Brent and Harrow Palestine Solidarity campaign urge members of the fund in particular, to write to the Chair of the Pension Fund Committee, Cllr Shafique Choudhary, requesting that the Committee divest from these funds on humanitarian and ethical grounds. Model letters, trade union model motion and further information HERE.

Israel can only maintain its grave breaches of international law and Palestinian human rights because of products, equipment and services it receives from a range of companies and financial institutions. These companies either supply the Israeli military, provide technology and equipment for Israel’s infrastructure of  military occupation, or are active in illegal Israeli settlements, based on stolen Palestinian land.

LGPS funds invest in two ways. Directly by holding shares in specific companies, and indirectly through investment funds, which holds shares on their behalf.

This database produced by Palestine Solidarity Campaign lists the investments of 55 LGPS funds in companies that aid Israel’s breaches of international law. It contains a mixture of direct investments, and investments through funds.

The investments listed below are indicative of the widespread complicity of all LGPS funds. Through our research we have found that the LGPS invests over £4.4bn billions in a range of complicit companies.

We found 85% of funds we analysed invest in companies listed in the UN Human Rights Office’s list of enterprises active in Israel’s illegal settlements based on stolen Palestinian land.  Given the rigorous engagement the UN OHCHR has undertaken with these companies, this provides a starting point for  campaigning.

Companies on the UN Human Rights Office’s list of companies active in illegal Israeli settlements are marked with an asterisk. While the list is not exhaustive, it provides a good place to begin campaigning, as the UN OHCHR has undertaken rigorous engagement with these companies. 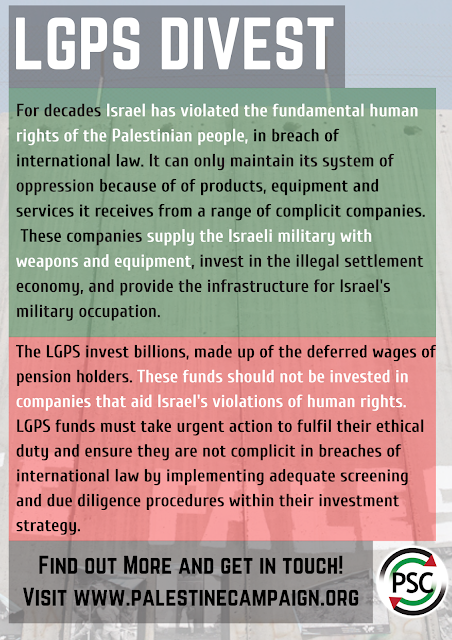 Posted by Martin Francis at 04:02 No comments: