We were unable to lobby Sarah Teather on the 24th November.
If you are from Brent Central, you are welcome to join the lobby on the 8th December at 6pm at   the House of Commons, Westminster.   Sarah will meet you in the Central Lobby.
You need to allow 15 minutes to get through security.
If you wish to take part in the lobby please e-mail mafran@globalnet.co.uk
who will pass the information on to the lobby organisers.
Posted by Martin Francis at 05:22 No comments:

I summarise below the views expressed by Barry Gardiner MP for Brent North when I lobbied him on the Palestinian issue on November 24th 2010:
Sarah Teather MP (Brent Central) and Glenda Jackson (Hampstead and Kilburn) are also to be lobbied on the issue and we will post their views here.
Martin Francis, Chair, Brent PSC
Posted by Martin Francis at 03:11 1 comment:

The Israeli assault on the Freedom Flotilla to Gaza had been “brutal and disproportionate” according to the UN Human Rights Council, Brent residents were told at a public meeting at Willesden Green library organised by Brent Palestine Solidarity Campaign.  Audrey Bomse, Legal Coordinator of the Free Gaza Movement detailed the various grave international humanitarian and human rights violations that Israel had committed.
The purpose of the meeting was to examine the relations between Israel and Palestine in the light of international and criminal law. The speakers, focused on the events of last May, when Israeli commandos intercepted a flotilla of vessels attempting to break the Israeli blockade and take humanitarian aid to Gaza.
Sarah Colbourne and Alex Lort Phillips, who had been on the Turkish vessel Mavi Marmara, which came under attack from the commandos, gave first hand accounts of the event to a shocked audience. Sarah and Alex said that the attack, in which nine civilians were killed, had led to a significant shift of opinion on the issue of Israeli’s illegal activities.
The meeting also heard about the attempts to revise the law on universal jurisdiction so that Israeli ministers, suspected of war crimes, would avoid arrest in the UK. Brent PSC is urging Brent residents to contact their MPs to ask them to vote against any weakening of the law and will be organising a lobby of MPs on the Palestine issue on November 24th.
Posted by Martin Francis at 23:55 No comments:

What lies behind Ahava products? 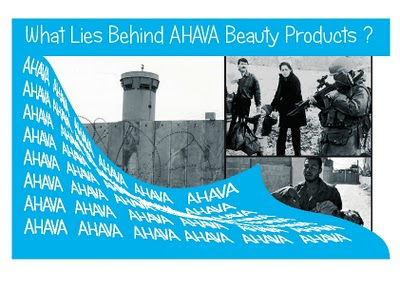 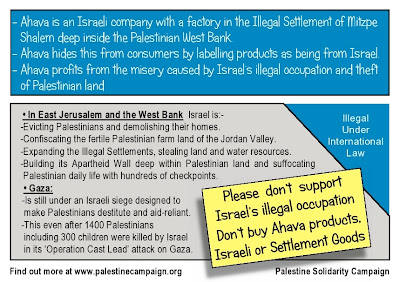 Posted by Martin Francis at 04:38 No comments:

Veolia should be dumped by Brent

Veolia is Brent Council's waste management contractor. Brent PSC believes that councillors should be aware of Veolia's activities in Israel before considering the renewal of its contract.

Veolia still holds shares in the Jerusalem Light Railway project which the UN Human Rights Council has declared is a "clear violation of international law", despite the recent announcement that it was selling its shares to Egged. The tram line runs across stolen Palestinian land connecting illegal Israel settlements and West Jerusalem thereby helping consolidating the occupation.

Veolia also runs bus services to the settlements on roads Palestinians are barred from using despite the fact that they are built on their land.

Veolia's shameful crimes in Palestine also include the Tovlan landfill site it operates in the occupied Jordan Valley where it helps Israel dump its toxic waste on to Palestinian land next to the Palestinian village of Abu Ajaj.
Posted by Martin Francis at 01:24 No comments: