Posted by Martin Francis at 00:02 No comments: 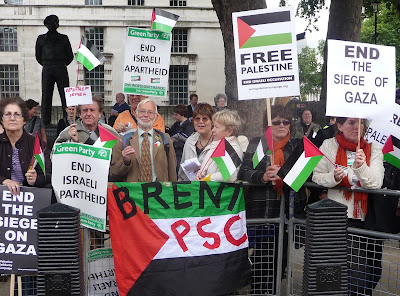 Activists from Brent and Harrow Palestine Solidarity Campaign, Brent Stop the War and Brent Green Party were among those who attended the 'End the Siege of Gaza' demonstration at Downing Street. As well as continuing to press the case for government and EU action on the siege the event also helped launch the next Free Gaza Flotilla which will leave in June. The demonstration was noteworthy for the wide range of support it attracted and in particular the increased role of trade unions.

There was a lovely moment when children on scooters took on the pro-Israel demonstrators who had been allowed to stage a counter protest outside the gates of Downing Street. 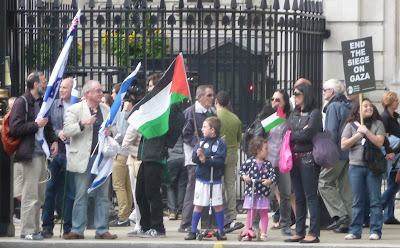 Posted by Martin Francis at 03:28 No comments:

End the Siege on Gaza Demonstration on Saturday

Saturday 14 May Protest at 12 noon opposite Downing Street
On Saturday 14th May campaigners will demonstrate on Downing Street against the siege of Gaza and in support of the Freedom Flotilla 2. The demonstration is timed to commemorate the Nakba, the catastrophe which began in 1948 with the ethnic cleansing of Palestinians from their homeland and continues today with Israel’s violent and illegal siege of Gaza.
Speakers at the demonstration will include:
Andy Slaughter, Labour MP for HammersmithBaroness Jenny Tonge, Liberal Democrat
Caroline Lucas, Green Party MP for Brighton Pavilion Palestinian musician, Reem KelaniJody McIntyre, journalist and political activist
Jonathan Ledger, General Secretary of NAPO Hugh Lanning, Deputy General Secretary of PCSSimon Dubbins of Unite the Union His Excellency Manuel Hassassian, Palestinian General Delegate to the UKDr Karma Nabulsi, Oxford academic and a former PLO representative
Dave Randall, guitarist, producer and composer Diana Neslen of Jews for Justice for PalestiniansKate Hudson of CND
Lindsey German of Stop the War
The demonstration has been called by
lPalestine Solidarity CampaignlStop the War CoalitionlBritish Muslim InitiativelCampaign for Nuclear Disarmament (CND)lPalestinian Forum in Britain.

Posted by Martin Francis at 03:57 No comments:

Who Profits from Jerusalem Light Railway?

Posted by Martin Francis at 03:54 No comments: