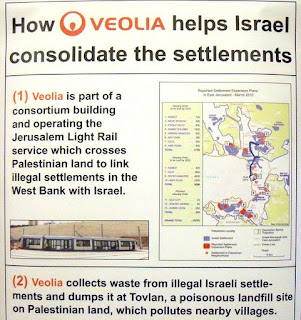 Brent and Harrow PSC invited councillors and the public to hear the case against Veolia at a meeting held in Willesden Green Library on Tuesday. All Brent councillors have now received the letter requesting that Veolia be excluded from the WLWA contract. It has also been sent to the West London Wast Authority where Cllr James Powney is Brent's representative. It has been signed by 302 Brent residents.
Veolia is currently on the long list for the multi-million 25 year contract and the short-listing is taking place imminently.  Supporters are urged to bring up the issue with their ward councillors. We are awaiting a response to our request to James Powney for a meeting to discuss the issue. He did not attend the public meeting.
Introduction by Martin Francis , Chair of B&H PSC and speech by Michael Deas Europe Coordinator of Boycott, Divestment and Sanctions National Committee (BNC)
Questions and discussion 1
Simon Natas, Human Rights Lawyer (ITN Solicitors)
Questions and discussion 2
Salim Alam, West London Palestine Solidarity Campaign
Questions and discussion 3
Posted by Martin Francis at 04:16 No comments: 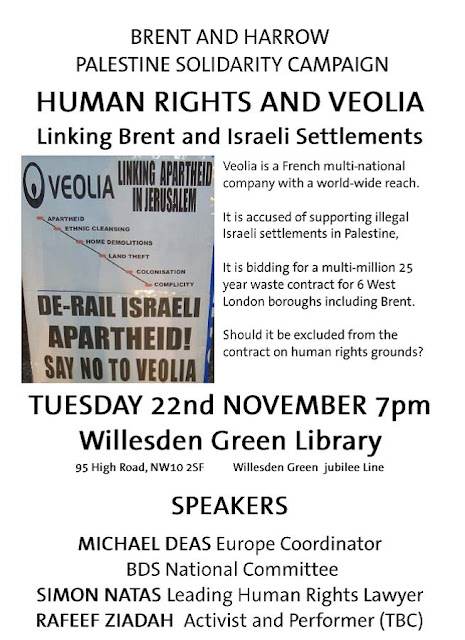 Posted by Martin Francis at 01:52 No comments:

Next Tuesday, Palestinian activists will attempt to board segregated Israeli public transportation headed from inside the West Bank to occupied East Jerusalem in an act of civil disobedience inspired by the Freedom Riders of the U.S. Civil Rights Movement in the 60’s.

Fifty years after the U.S. Freedom Riders staged mixed-race bus rides through the roads of the segregated American South, Palestinian Freedom Riders will be asserting their right for liberty and dignity by disrupting the military regime of the Occupation through peaceful civil disobedience.

The Freedom Riders seek to highlight Israel’s attempts to illegally sever occupied East Jerusalem from the rest of the West Bank, and the apartheid system that Israel has imposed on Palestinians in the occupied territories.

Several Israeli companies, among them Egged and Veolia, operate dozens of lines that run through the occupied West Bank and East Jerusalem, many of them subsidized by the state. They run between different Israeli settlements, connecting them to each other and cities inside Israel. Some lines connecting Jerusalem to other cities inside Israel, such as Eilat and Beit She'an, are also routed to pass through the West Bank.

Israelis suffer almost no limitations on their freedom of movement in the occupied Palestinian territory, and are even allowed to settle in it, contrary to international law. Palestinians, in contrast, are not allowed to enter Israel without procuring a special permit from Israeli authorities. Even Palestinian movement inside the Occupied Territories is heavily restricted, with access to occupied East Jerusalem and some 8% of the West Bank in the border area also forbidden without a similar permit.

While it is not officially forbidden for Palestinians to use Israeli public transportation in the West Bank, these lines are effectively segregated, since many of them pass through Jewish-only settlements, to which Palestinian entry is prohibited by a military decree.
Posted by Martin Francis at 04:08 No comments: