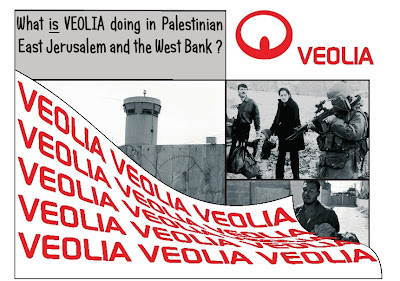 Following  a two year local campaign by activists in North London, French multi-national waste company Veolia withdrew from a North London Waste Authority £4.7 billion waste contract just before Christmas.  Campaigners opposed Veolia on the grounds that it abuses human rights through its complicity in Israel's violations of international law in the occupied territories of Palestine.
Richard Falk, UN Special Rapporteur on the West Bank and Gaza Strip, in a letter to NLWA councillors wrote:

It is my view that Veolia’s violations of the UN Global Compact principles and its deep and protracted complicity with grave breaches of international law make it an inappropriate partner for any public institution, especially as a provider of public services.

....I urge you to follow the example set by public authorities and European banks that have chosen to disassociate themselves from Veolia and take the just and principled decision not to award Veolia any public service contracts. Such a measure would contribute to upholding the rule of law and advancing peace based on justice.
Veolia currently  operates waste collection, recycling and street cleansing services in Brent in a contract that expires in 2014. The procurement process for a new contract, that also includes parks maintenance, has begun.
Brent Palestine Solidarity Campaign has pledged to campaign against its inclusion in the upcoming Brent Council public realm procurement process. Liz Lindsay, Secretary of Brent and Harrow Palestine Solidarity Campaign said:
Brent Council must not ignore Veolia’s grave misconduct. They should not include Veolia in their procurement short list. Otherwise they will risk Veolia pulling out at the last minute as they did with the NLWA procurement, This would leave  the Council obliged to give the contract to the only remaining bidder  left in the process.  I am sure  Brent Council will recognise Veolia’s role in Palestine and exclude Veolia from the start.

Declaration of interest. I am chair of Brent and Harrow Palestine Solidarity Campaign
Posted by Martin Francis at 06:14 No comments: