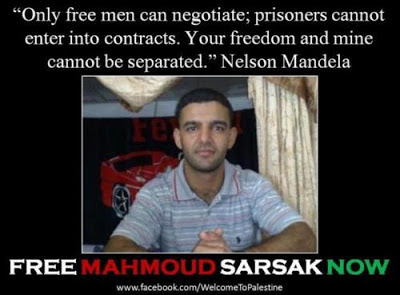 The Palestinian footballer and human rights campaigner Mahmoud Sarsak brought greetings from 'the people of Gaza under siege and Gazan prisoners and Jordanian prisoners in Israeli jails' when he spoke to an attentive audience at the Willesden Green Pakistan Community Centre earlier this week.

Mahmoud, whose hunger strike attracted international attention, said that the illegal occupiers of Palestine wanted to oppress and discredit any Palestinian talent in any field. Israel wanted persuade people that it was a cultured place in contrast to Palestine. Palestinians wanted to share their culture with other nations as a way of supporting their humanitarian cause.

He described the Israeli strategy as one of imprisonment, exile and ultimately death. Following his arrest on July 22nd 2009 when, replete with the necessary pass, he was crossing Israeli land to the West Bank to take up a place in a local football team, he was imprisoned.

Mahmoud described the prison as:

A graveyard for the living where they kill people's dreams

He was placed in tiny cell and  interrogated  for 45 days and allowed very little sleep. Tortured both physically and psychologically he had been tied by arms and legs to a chair and subjected to 15 hours uninterrupted interrogation. One technique was to expose prisoners to extreme cold via an open refrigerator. He described how some prisoners fainted were then revived and returned to the freezing conditions, others made seriously ill were taken to hospital and after recovery returned for further interrogation.

Another technique was what Mahmoud referred to as 'the banana' after the shape made when hands were tied to legs and  and the prisoner left for hours. All this was an attempt to get prisoners to confess to what they hadn't done in order to justify the arrests to the international authorities.He said that he had been subject to other tortures but 'these were too ugly to speak about in a public meeting'.

Speaking calmly and with dignity, Mahmoud said. 'They tried to get me to confess but I hadn't done anything'. The detention by Israeli intelligence had taken place under 'illegal fighter' laws of the Israeli Justice system aimed at Lebanese and Hezbollah fighters which were not recognised internationally.

Mahmoud said that bizarrely the Israeli authorities wanted to convince people that he was not Palestinian and not a footballer - but a Lebanese fighter.

Pausing and surveying the hushed audience Mahmoud said, 'When you go to jail you are exposed to human suffering you would never imagine'.

He described how he had witnessed the interrogation and intimidation of 14 or 15 year old children which was clearly against international law. He said:

Children should be protected and enjoy childhood and an education. For Palestinian children it is a different story.

Remarking that children are resilient and would survive to have a future, Mahmoud said that older prisoners were neglected, became ill and were slowly dying. It was very painful to watch helplessly as your brothers slowly died, deprived of the painkillers that would have been available outside jail.

Mahmoud movingly described the death of his cellmate of 9 months from stomach cancer. He had called the doctor repeatedly but each time the doctor had said it was just 'stomach ache'.  After his death the Israeli media had said it was a case of suicide. A case of kidney disease had been refused admission to hospital and there was currently the case of a prisoner with abdominal cancer that was worrying Mahmoud because it appeared that the international community would not do anything to help the victim:


Outside jail you hear stories...inside you see them. You are treated as a number. You have no right to a family or care. No right to socialise. Some prisoners have been in solitary confinement for 11 or 14 years without ever talking to another human being.

After seeing this with my own eyes I had to do something myself. Not just sit - I had to act. This is where the story of my hunger strike began.

When I started comparing my freedom outside with my life inside jail I had to decide whether to live in jail without dignity and probably die or die with dignity. I decided I had no choice but to go on hunger strike, especially when denied the truth.

I nearly lost my health but nothing compared (after his release) with getting my freedom and seeing my mother again. 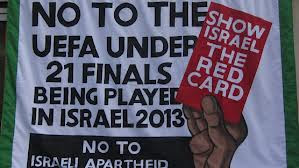 Despite what the international community knew about Israel's abuse of human rights, including bombing football stadia in Gaza in 2009 and 2012, its apartheid against its own citizens and restrictions on who Palestinian teams can play, Uefa had 'rewarded' Israel with the right to hold the Under 21s event, Mahmoud told the audience.

He had taken part in the campaign to 'Show Israel the Red Card' to stop Israel holding the Under 21 finals, as a footballer and a humanitarian, using many strategies and trying to explain the history behind the issue. Since the 1917 Balfour Declaration Palestine has been bleeding. The UK and USA have helped Israel extend their state on Palestinian land and 'denied us our freedom, culture and heritage'.

Israel was trying to kill hope amongst the young and talented but this will not work -  hope can never be killed. Mahmoud  said 'the world has forgotten not just me but 5,000 prisoners' and cited the example of Norway's actions as one that other countries should follow.

As chair of the meeting I thanked Mahmoud saying:


As long as there are courageous, empathetic and insightful people like you to testify, hope will never be killed. I hope your message will be heard not just in this small community centre but throughout the world. We are privileged to have heard you speak this evening.

Posted by Martin Francis at 02:57 No comments:

In an unprecedented move Brent councillors were on Monday (24 June) blocked from discussing a properly tabled motion put forward by Liberal Democrat councillors.

The motion, proposed by Willesden Green councillor Ann Hunter, sets out concerns about Veolia’s activities supporting Israeli settlements in occupied Palestinian territory which are considered by the United Nations to violate international law. Veolia has a record of building and operating a tramway and bus services which discriminate against Palestinian residents.

Veolia is currently on the shortlist for Brent’s public realm contract. If successful the company will receive tens of millions of pounds to run waste and recycling, street cleaning, grounds maintenance and burial services on behalf of Brent Council and BHP.

The Liberal Democrats want the council to be able to take into account the record of companies which are involved in violations of human rights when deciding who to give business to.

Brent Council already takes a stance on ethical issues when procuring some supplies – for example it has decided to be a Fair Trade borough and encourage the purchase of fair trade goods. The Liberal Democrat group believes it is a logical extension of that principle that when buying services the council should be able to exclude companies who break international law or violate basic human rights.

Earlier on Monday evening we honoured Nelson Mandela, a man with a great record of fighting discrimination, promoting truth and reconciliation, and an inspirational advocate  of freedom of speech. Mandela has always been utterly forthright in his condemnation of any system which divides people by race. That is what this man stands for and why we honour him.
In Brent we are proud to be a borough where residents from all different backgrounds live, work and travel together We are truly a rainbow borough.
Veolia shares in the building and running of services which Palestinian residents are not allowed to use. Just imagine if on our way into London we had to divide: Asians on one bus or tube, White British on another, Jews on another and Afro-Caribbean residents on another.
Of course, here that would be illegal. We should not put local taxpayers’ money into the pockets of companies which act in this way.

I am shocked that council officials intervened to prevent us even discussing this issue. It has been lawfully debated elsewhere. Councillors are elected to speak out for the residents of Brent. If the Labour party or council officers wanted to put forward a different view they should have had the guts to do so in open debate instead of trying to stifle the democratic process.
Posted by Martin Francis at 14:20 No comments:

Posted by Martin Francis at 07:31 No comments: