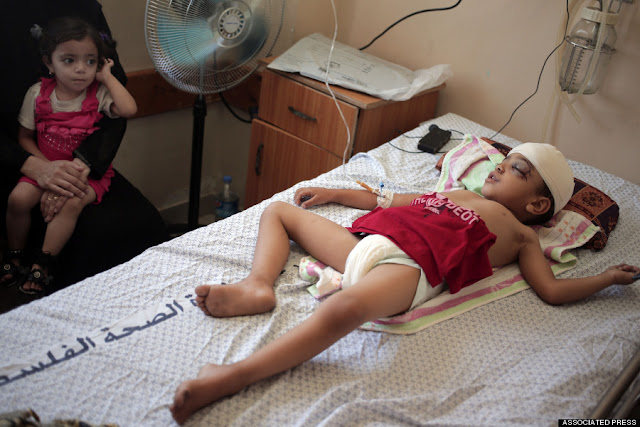 A message from Kam:

I will be taking part in The Big Ride (Edinburgh to London - 435 miles) in August, to raise money for a Palestinian children's charity, specifically aiming to provide emergency aid for the children of Gaza.

After the war last summer the population of Gaza is still living under a siege which prevents adequate access to basic necessities. There is widespread povertyand a closed environment where people and goods cannot travel freely. In addition to malnutrition, the UN estimates that 400,000 children in Gaza are showing signs of severe psychological distress including bed-wetting, nightmares, aggression, phobias, extreme withdrawal or anxiety and difficulty eating, sleeping or speaking.

It would be great if you could sponsor me on the just giving page below (you may need to copy and paste into address bar) and maybe pass on details to others whomay be interested in donating to such a good cause:

Thank you!
Posted by Martin Francis at 04:39 No comments: 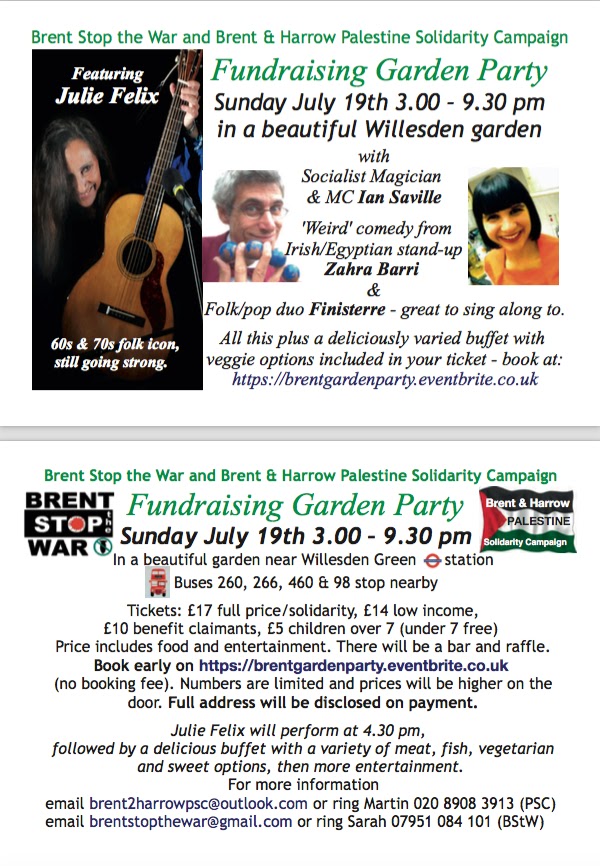 EVENTBRITE
Posted by Martin Francis at 08:51 No comments:

BDS an issue for US Presidential hopefuls

From the US organisation Jewish Voices for Peace


Monday, major newspapers published a letter from Hillary Clinton to Democratic party mega-donor Haim Saban. In it, she weighed in on the growing Boycott, Divestment, and Sanctions movement - by committing to fight it.

She wrote "to express my alarm over the Boycott, Divestment, and Sanctions movement....I know you agree that we need to make countering BDS a priority."
Similarly,Ted Cruz told the crowd at a recent Sheldon Adelson-funded event that "in 2017 we need a president who will stand up directly and confront the [BDS] movement."

Click here to tell all Presidential candidates: We support equal rights for all peoples of Palestine and Israel. And we're not alone.

The BDS movement is becoming a very public conversation topic in US politics. We know this grandstanding against BDS is first and foremost about the hunt for billionaire mega-donors - whether they be extreme right-wing fanatics like Sheldon Adelson, or Haim Saban, whose ultra-conservative streak is more specifically focused on opposing Palestinian rights.

Candidates need to know that selling out Palestinian rights doesn't curry any favor with us. Polls repeatedly show that growing numbers of all Americans - even and increasingly Jews—have had it with Israel’s endless settlement expansion, inequality, and denial of rights. They recognize that Israel is not interested in peace, and don’t want US policy to give Israel a free pass anymore.

Sign here to show how many of us want a new path for US policies toward Israel and Palestine.

If we raise our voices, there's actually reason to believe we can make a difference.

Just 4 months ago, working with many partner organizations, we helped convince 60 Members of Congress to boycott Netanyahu's speech to Congress. And days ago, a new survey showed only 48% of Democrats think Israel wants peace with its neighbors, while 47% think Israel is a racist country.

Sign here to show how many of us want an end to Israeli policies of occupation, official discrimination, and expulsion.

If we get 10,000 signatures, we'll deliver your message to all the candidates.

This is a critical moment for broad education about what Israeli policies are doing, and how we can work with people around the globe to transform them. We need to seize it!
Posted by Martin Francis at 02:35 No comments:


"What measures is the UK government currently taking to lift the blockade of Gaza, particularly with respect to ensuring the vital entry of humanitarian aid after the devastating attacks seen in 2014?"

"In the light of the UN reported recording of 221 incidents of settler violence with virtually no prosecutions, what discussions has the minister held with Israeli ministers over the failure to prosecute settlers for acts of violence against Palestinians?"

The questions are tabled for Tuesday July 14th and if not picked to be answered orally should receive written answers,

Dawn Butler has become Vice Chair of the Labour Friends of Palestine.
Posted by Martin Francis at 02:02 No comments:

As part of a national lobby day organised by the Palestine Solidarity Campaign (PSC) on 23 June 2015, recently elected Brent Central MP Dawn Butler met seven of her constituents in parliament to discuss various issues related to Palestine and British military and commercial ties with the state of Israel.

During the PSC’s pre-election campaign, Ms Butler had provided assurances that she was pro-Palestinian and supported various measures in support of Palestinian human rights. During the meeting, which lasted around 30 minutes, she echoed such views, comparing the disparity in the balance of power between the Israelis and Palestinians and the effective situation on the ground to apartheid in South Africa. Ms Butler stated that the Israeli state has a right to defend itself but that its exercise of this right is disproportionate.

The Palestinian issue is of broad interest to residents in the north London borough of Brent across all communities, and constituents raised issues of concern to them and their fellow residents, including lifting the siege of Gaza, to allow the free movement of people, goods and humanitarian aid. Ms Butler agreed that the blockade should be lifted immediately, and agreed to sign related parliamentary motions on the issue.

Other issues raised include ending the arms trade with Israel and all military collaboration, including the sales of weapons and components, and taking steps to ensure products made in Israeli settlements, which Ms Butler agrees are illegal and unjustifiable, are not sold in the UK. On all issues, Ms Butler said she was willing to put questions to ministers and work with constituents on their concerns. She also said that she was planning to visit Gaza to see the situation for herself.
Posted by Martin Francis at 04:35 No comments: