180,000 plus people took part in a notably youthful and internationalist march for Palestine on May 22nd.  Many thanks to everyone who attended from Brent and Harrow who were dispersed amongst the huge crowd. This is something we must build on to give the cause of justice for Palestinians a higher profile in our boroughs and beyond. 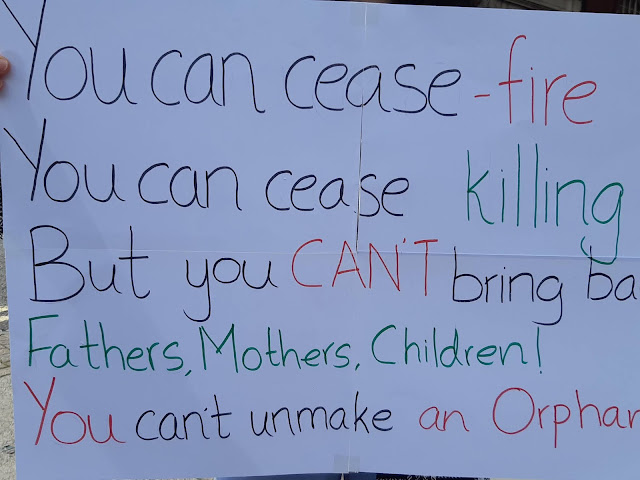 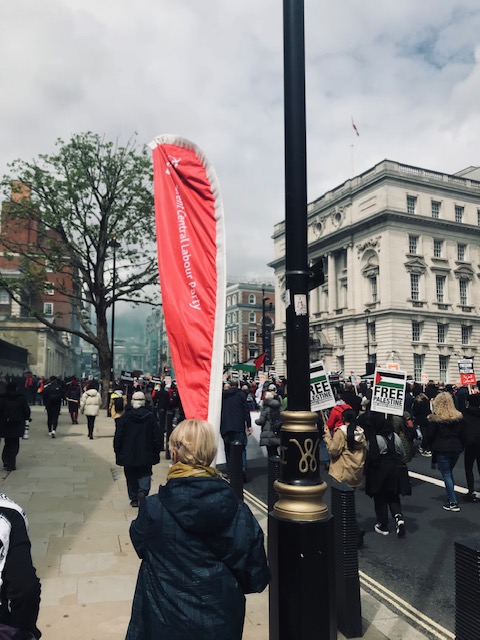 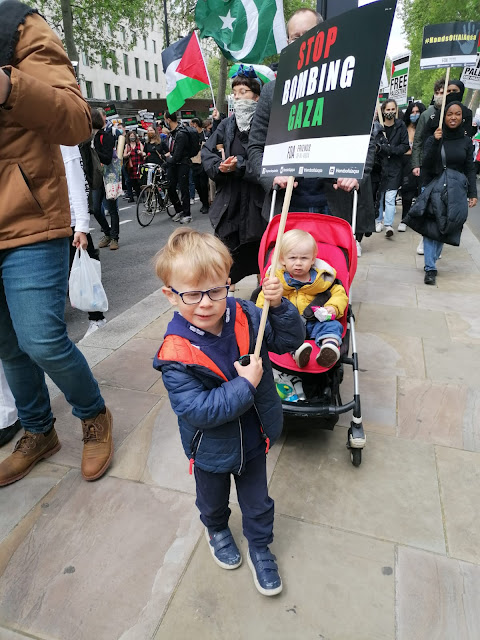 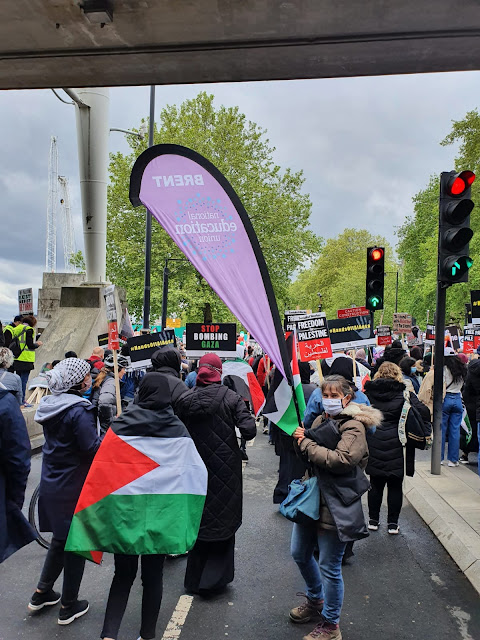 Brent National Education Union wait for the march to start

Posted by Martin Francis at 02:22 No comments:

We, at Harrow & Brent Palestine Solidarity Campaign, condemn the antisemitic, misogynistic and abusive language used by those in a convoy of cars last Saturday in the Finchley Road area.

The Palestinian Solidarity Movement is an anti-racist movement and we oppose all forms of racism including antisemitism.

With that said, the Palestinians are facing a violent, systemic form of racism and we will not stop campaigning until the Palestinians are able to live in complete freedom & dignity. Members and sympathisers are urged to join us along with family and friends at the National Demonstration on Saturday May 22nd. Meet at 1pm on the Victoria Embankment to march to Hyde Park.

One group is meeting at Willesden Green station at 12.30 on Saturday to travel to the demonstration and you are welcome to join them. Others are making their own way there. 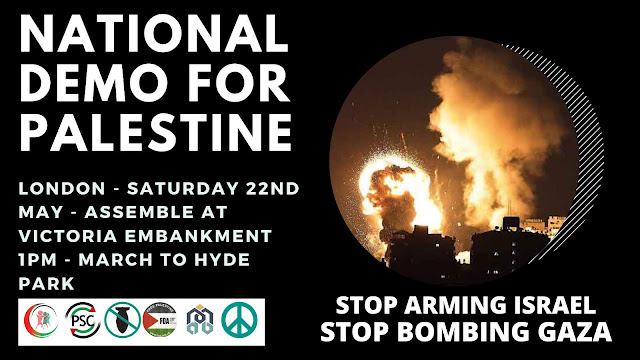 Kamel Hawwash, Chair of Palestine Solidarity Campaign has written about the Finchley Road incident in the Middle East Monitor. LINK This is part of what he said:

“As an anti-racist who is also Chair of an anti-racist solidarity organisation, I distance myself and the organisation from any attempt to blame British Jews for the actions of Israel. The latter are driven by its extreme right-wing leadership's policies and the Zionist ideology that planted Israel in my homeland Palestine, aided and abetted by Britain.

Neither I nor the PSC or our partners want racists taking part in our demonstrations and rallies. More importantly, the Palestinian people do not want the support of racists who attempt to use our cause to spew their hatred of Jews.

I was really shocked and troubled, therefore, when I saw a video shared extensively on social media on Sunday in which the flag of peace, the Palestinian flag, covered vehicles in which some anti-Semites drove through Jewish areas in London and shouted racist obscenities. This was not done in the name of the Palestinians, and I condemn it unreservedly and ask the authorities to take all measures necessary to deal with these racists.”

OUR SOLIDARITY  IS IMPORTANT TO  PALESTINIANS AS ISRAEL CONTINUES ITS ONSLAUGHT. PLEASE SHOW THEM THEY HAVE FRIENDS AND ALLIES BY JOINING THE MARCH ON SATURDAY AND SHOW OUR GOVERMENT THAT THEY MUST ACT.

Facebook page https://www.facebook.com/BrentHarrowPSC
Posted by Martin Francis at 12:57 No comments:

The vile anti-Semitism shouted today from a convoy of cars has no place in the Palestine solidarity movement. We condemn it and all anti-Semitism, on its own account and also as it serves to undermine the anti-racist struggle for Palestinian rights. 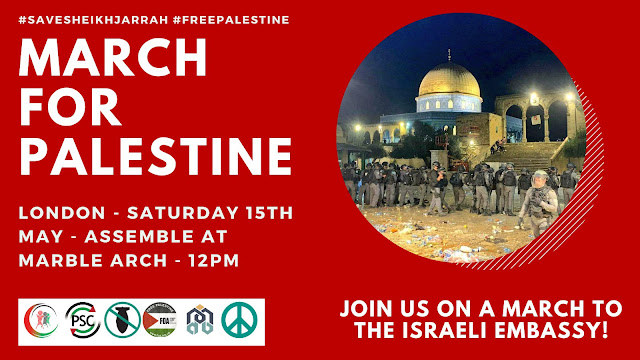 Brent and Harrow PSC urge you to join us on Saturday 12 noon at Marble Arch to march to the Israeli Embassy to protest at Israel's actions in East Jerusalem and the bombing of Gaza.

We attendeded the Rally of more than 3,000 people at Downing Street yesterday  and need you to increase the numbers so that the world (and the media) take notice.

Posted by Martin Francis at 02:30 No comments: 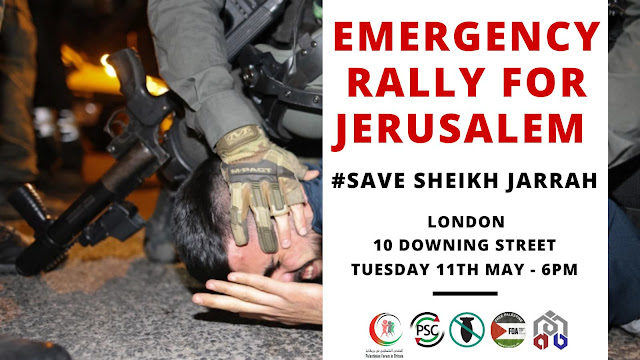 Responding to a constituent troubled by events in East Jerusalem, Tulip Siddiq, MP for  Hampstead & Kilburn made the following statement:

Thank you very much for writing to me about the appalling violence and unlawful eviction of Palestinian residents in East Jerusalem. I share your deep concern at the violence taking place in East Jerusalem and the attempts to evict Palestinians from their homes by Israeli settlers. Such evictions are a breach of international law and the Israeli authorities must step in immediately to bring this to an end.I strongly condemn the violence towards worshippers who were attempting to celebrate Ramadan peacefully outside the al-Aqsa mosque. The Israeli authorities have a responsibility to defuse tensions in Jerusalem and ensure religious rights are upheld and holy sites protected.I will be working closely with the Shadow Foreign Secretary Lisa Nandy MP and my other Labour colleagues to ensure that this message is heard and that UK Government Ministers are clear with their Israeli counterparts that they must bring an end to the violence and evictions taking place in East Jerusalem.

Posted by Martin Francis at 02:29 No comments: